Hi! This is Guillaume, for once 😉

GDC 2018 was my and Rafa’s first, and it was a really cool experience, though it took me some practice to get there!

GDC, for anyone who doesn’t know, is the world’s largest yearly conference of game developers. 28,000 people went this year apparently, and just walking around San Francisco was an unusual experience thanks to the visible badges of the attendees. It was like adventuring to an MMO city where every inhabitant is also an adventurer, complete with the feeling of belonging to a huge community of like-minded people and the feeling of being not-very-special-at-all. 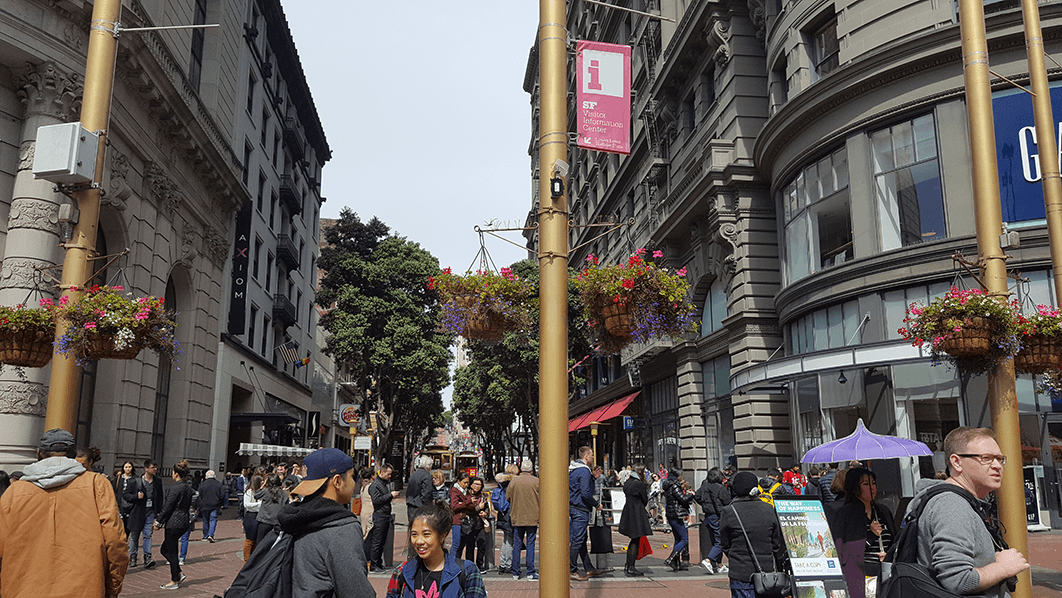 When I showed up, I wanted to meet as many developers as I could, so I could start having career acquaintances! There are people who build so many relationships over the course of jobs and conferences that attending the conference is like going to a high school reunion. I get a lot of satisfaction out of seeing old friends, so I wanted to get that process started. But, there were a few things I didn’t consider going in: 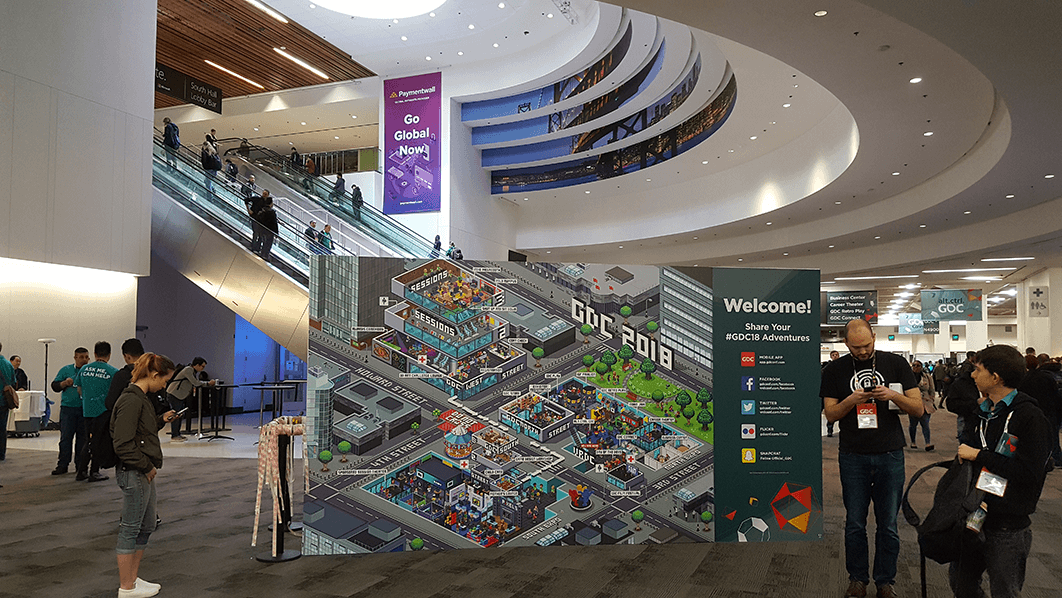 In other words, I was pretty confused my first day in the crowd. I was trying to meet people with shared interests, who I might stay in touch with. In normal life, talking to the nearest person will make both parties happier (on average, at least), but requires overcoming social barriers. By contrast, at GDC, it was easy to have pleasant talk with the people around me, but not necessarily to have a lasting, memorable conversation. I had lots of business cards, but few with which I could associate a topic on which I’d want to follow up. I resolved that this was my first GDC, and rather than worrying about making long-term connections now, I’d focus on enjoying and learning about the event.

Then, Rafa and I made a few surprise discoveries. In fact, I believe we found a world-class conference hack! But I’ll save the best for last.

The first thing I learned was that GDC is actually full of little subconferences. There are meet-ups based on genre of interest, meet-ups based on technology and platform, etc. And, these events are often quite small, which means every attendee has a sort of shared secret: the titular niche of the event! And that kind of shared secret is what a friendship is founded in. Meeting people who shared my knowledge of ascii roguelikes was very rewarding, not because I’m not interested in video games at large, but because those conversations felt special!

The most relevant example of this was the Science Games meetup. Rafa and I went there equipped with Tablecraft business cards, but came away discussing what we’d learned about antibodies from a game on someone’s laptop, and how many years citizen science initiatives would be cost-effective before AI becomes too strong. It was a pleasure to be carried away by my own enthusiasm. One of the positive outcomes of the conference was the inspiration it gave us, and a hefty chunk of those moments came from discovering people’s projects at the Science Games meetup. 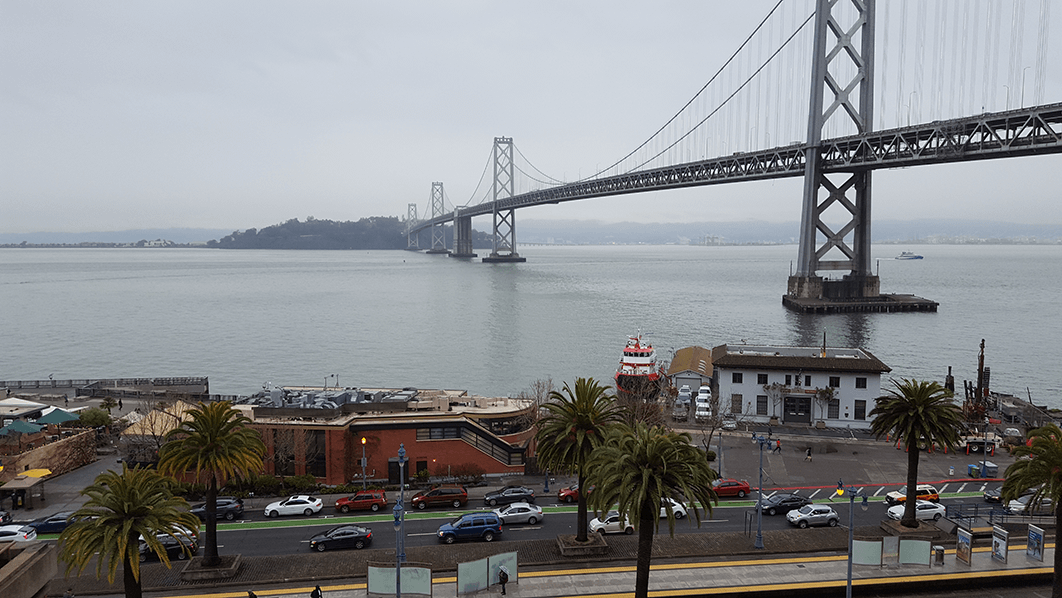 Cool friends beget other cool friends, which is something I already knew. What I did not realize, going into GDC, was how many cool friends I already had, from working on Liminal and Tablecraft, to as far back as John Oliver, the first person with whom I ever worked on a computer game. Here are a few people Rafa and I got to meet, thanks to introductions from surprisingly well-connected peers:

Round 1 Tablecraft contributor (and Liminal team member) Quinn Griffin introduced us to VP of Oculus Max Cohen, who, having already seen our project, told us in a brief meeting to come talk again when we had something really polished. It was funny, if disappointing, but it seemed like the only reason someone would do that was if we had a chance to make something really good, so we took it as a success (especially considering Tablecraft was very young). Plus, we had an NDA’d chance to see REDACTED. 😉 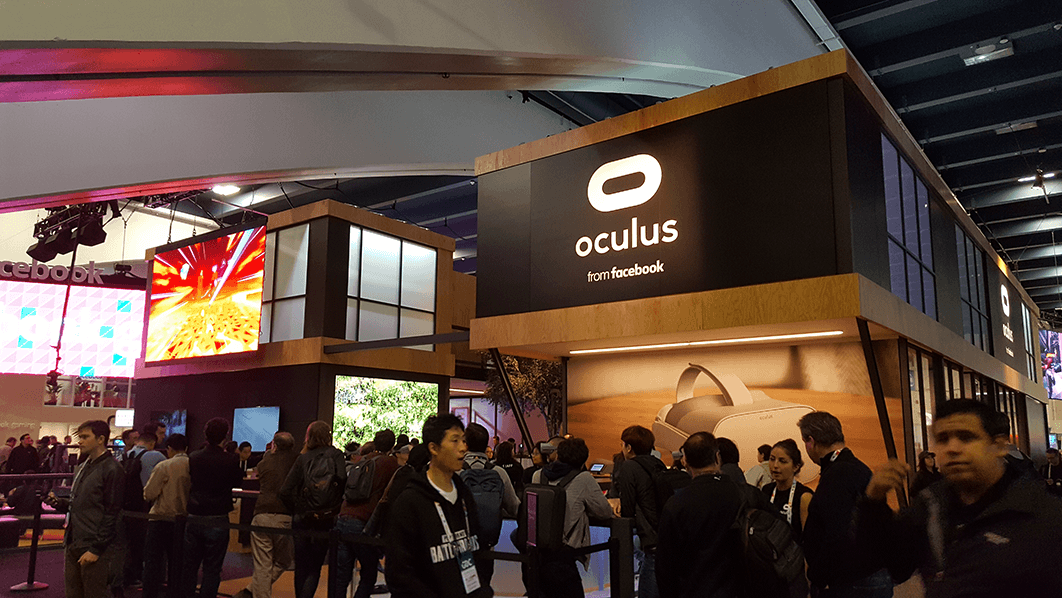 The founder of publisher PopAgenda, Genevieve St.-Onge (@gankstrr), offered to work with us promoting our other project Liminal, which is ramping up to a free steam release. A lot of the Liminal team got to be there, and it was really cool to have someone think so highly of the project that they’d ask to be involved in that way. Plus, Gen said she was impressed with Raf’s and my co-founder dynamic. I get to be the straight man most of the time, so I’m fortunate to have little responsibility on that front. I still felt very proud. 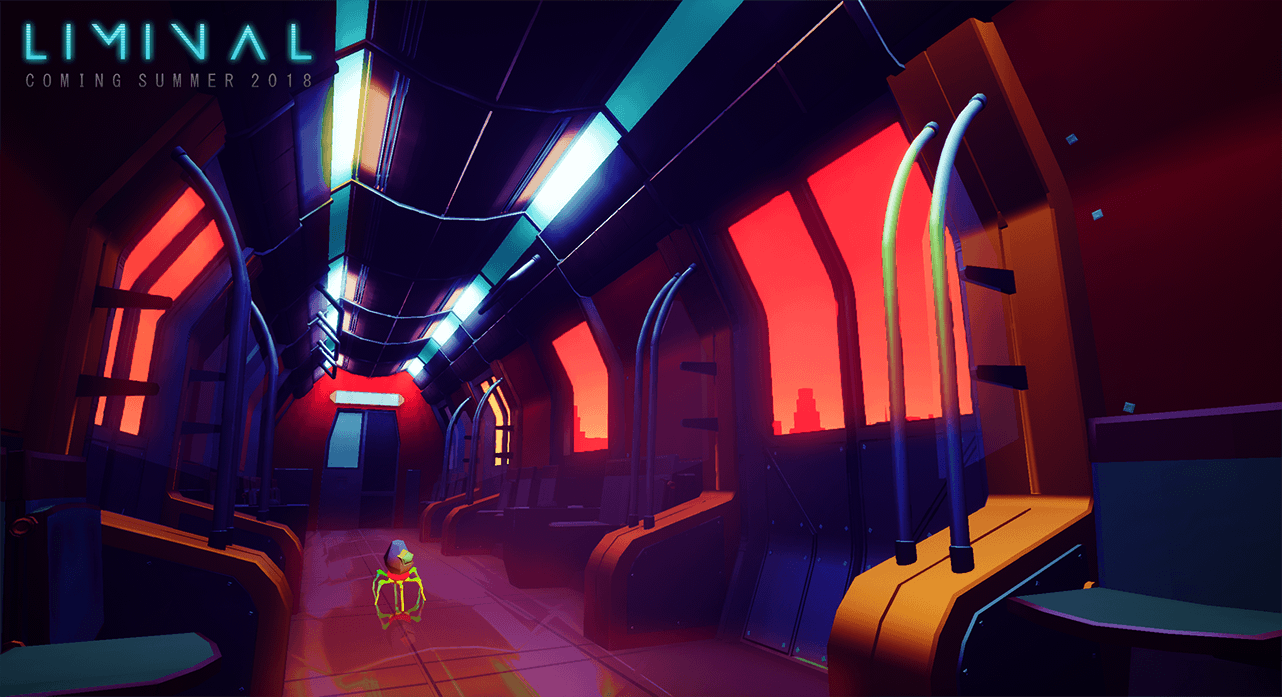 Liminal, a game by a team of 16 people, on which Rafa acts as Development Director and I as Lead Designer

John Oliver currently works for indie developer Funomena, and he introduced me to a friend who used their coworking space named Hanford. This was arguably the biggest GDC outcome for Liminal, since Hanford is the developer of a first-person puzzle game. And, at the event, so were several of Hanford’s friends, including Scale developer Steve Swink. We’ve been swapping feedback with him and his community of first-person-puzzle-makers for months now. It’s been like having access to old-company tribal knowledge, except in the context of a project which can turn on a dime. Steve helped us completely redefine our art and level dressing style to be more helpful to players of our otherwise very disorienting first-person puzzle game, Liminal. 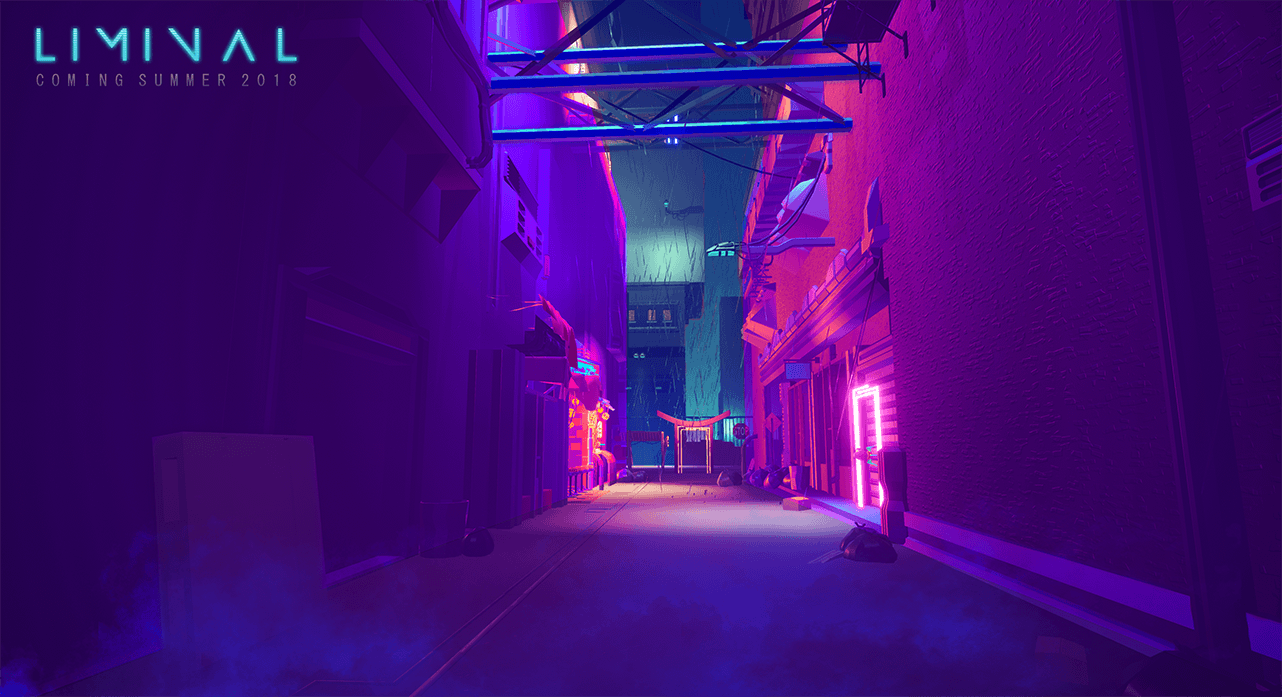 Liminal, coming out for free on Steam later this Summer

The moment you’ve all been waiting for! What follows is the official Raf and Guillaume Conference Hack of the Year:

Working next to the outlets.

Let me explain. After meeting with Gen, we were EXTREMELY pumped. Someone who knew what they were doing was singling out one of our projects just to be involved! She’d only seen footage of our game, but we thought our design was good too, and we wanted to keep her interest, so we resolved to put together a brief for her ASAP! We had nothing scheduled for the last day of the conference, so we set up at a table in the Moscone Center, plugged in our computers, and started writing. It was a well-lit, social work environment, so there was a lot to recommend it – we ended up working for 7 hours. But first, something unexpected happened. We were only using 2 of the 6 outlets at our table, but not every table had an outlet.

Experienced, knowledgeable developers need to charge their phones just as much as anyone else, and every 30 minutes or so they would stop at the corner, ask us if they could use an outlet, and sit in a chair, bored and waiting. Meanwhile, we would carry on discussing our project, and how best to present it to Gen. In other words, people with nothing better to do were hearing us talk in detail about the work we were doing that we were passionate about, in an environment where strangers are happy to talk to each other. We met a dozen completely different, experienced developers, who actually knew about our project because they’d been hearing us talk about it! We got tons of feedback. It was glorious. 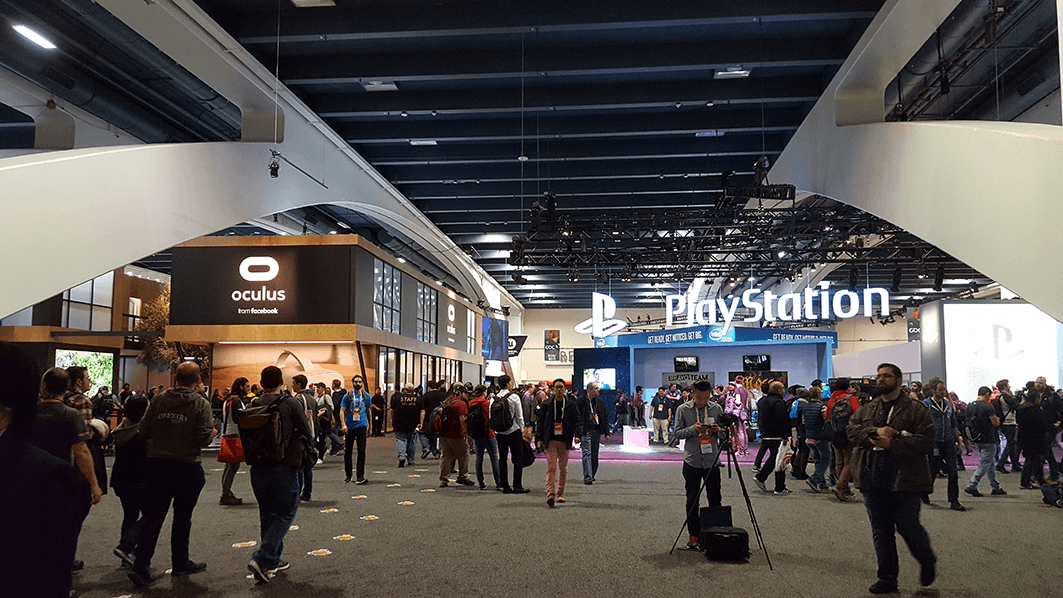 In summary, GDC started out pretty overwhelmingly huge, but by the end happenstance had happened enough to trace the pattern that so many developers report at these kinds of conferences. Both Liminal and Tablecraft were unknown to the outside world at this point, and it was extremely rewarding to see so much interest in both ideas. The moment we flew back we got working. And it was easy, since we’d been so inspired, we’d started our momentum at the conference itself!