It’s Guillaume for another classic conference post-mortem! This was easily the best conference we’ve been to, so hopefully my enthusiasm comes across in the excess of exclamation points!

If you’ve been following Tablecraft awhile, then you probably remember that we’ve been trying to fund the early development of the game through an SBIR Grant. In particular, you may remember Edward Metz from the Games for Change 2018 postmortem. Well, the ED Games Expo is his baby, and it’s all about showing off the education games funded by the SBIR program, which he directs for the Institute of Education Sciences. Everyone there was pretty much a hero of ours, since Tablecraft was one of the few invited games that didn’t already have a grant, and the conference exists to promote the best work that comes through the system. So you can understand how big a deal this was, our VR station was between NASA and MIT on the VR booth chart. But, it wasn’t just cool because there were so many exhibitors we admired there – this conference was special because of its attendees. 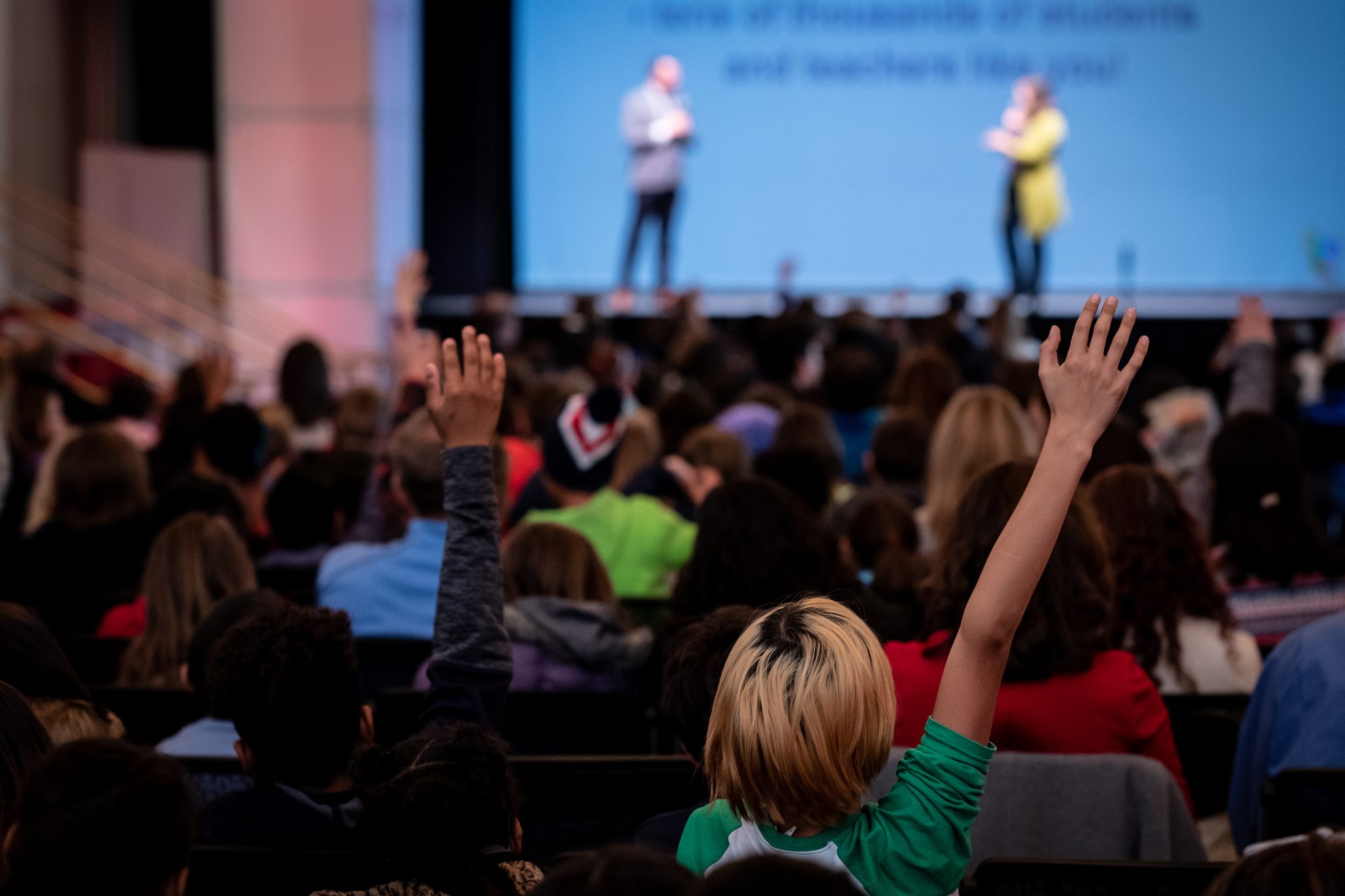 Photo shamelessly stolen from the U.S. Department of Education, please don’t sue us, we don’t have any money and we forgot to take pictures

We had barely finished setting up our booth in the morning of the first day when 1200 kids stormed into the conference hall excited to play the games there over the course of 4 short hours. Even with 2 VR stations, Tablecraft became permanently, hilariously swamped with players waiting in line for a chance to try the game. 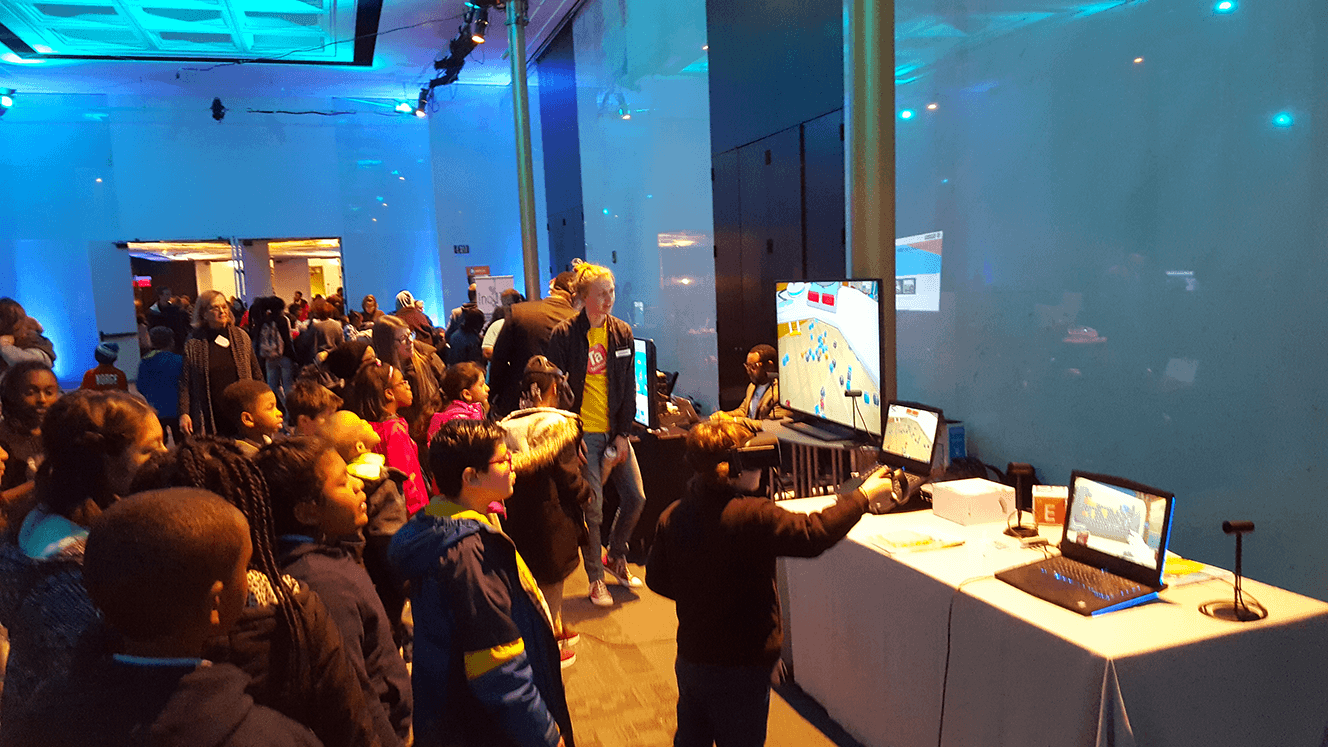 Here’s a picture that we took. Look at all those kids! 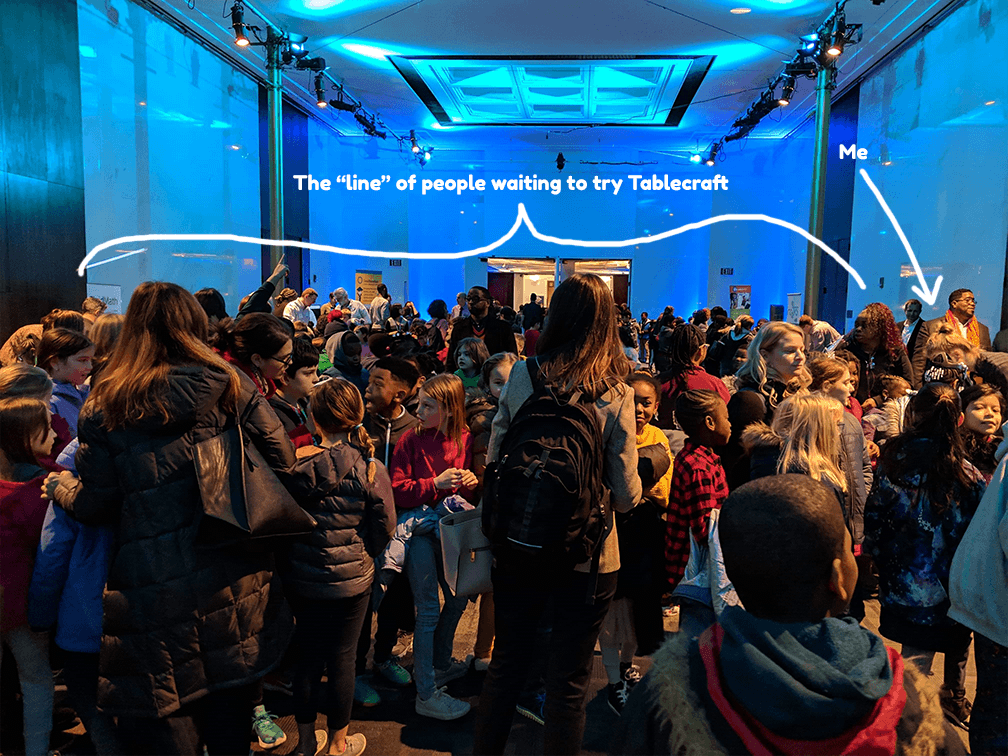 Pictured here: me trying not to be trampled while explaining the game. 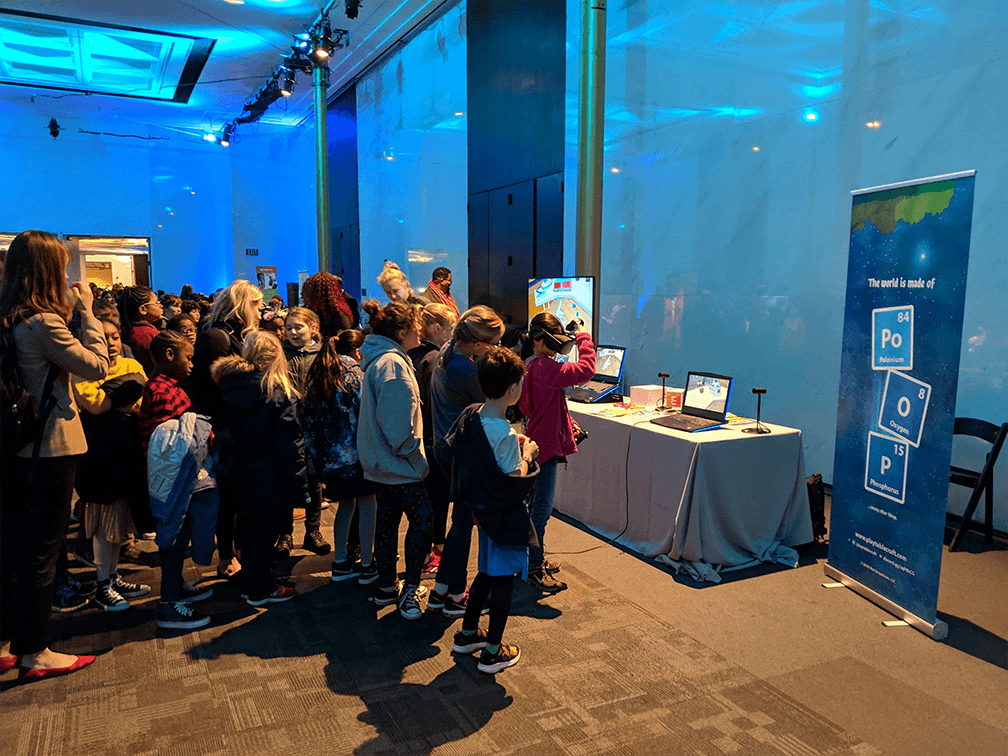 Normally I start these post-mortems from the start of our conference experience, so it might seem weird to launch right into over 1000 kids swarming the game, but that was actually the very first thing to happen after we arrived. It was like the levee broke on the conference hall doors. My voice was hoarse within 30 minutes from trying to explain the game and manage the “line”, which was often little more than me asking the group to tell me who was next, since everyone was crowded around the player in VR, watching the game and offering advice on what to craft. I was at the big TV and Rafael was at the small station, so any time an adult came by to do an interview or anything like that, he had to talk to them, since the big TV was always completely drowning in kids. Look how happy he looks in this article’s cover picture. His kids are even standing behind the player in the headset rather than grabbing the player’s arms to “teach” them how to play…

I didn’t know about this until after the 4 hours were over, since we barely got to talk to each other during the maelstrom, but apparently several of the kids from Rafael’s line ran over to my “line” after playing Tablecraft, and pretended they’d never played the game at all so they could have a second turn!

After the kidstorm, there was what the conference called “Office Hours”, where booths for consulting companies, government agencies, and venture capital firms (collectively known as stakeholders) were set up for developers like us to check out. It was basically like the conference flipped upside down for the afternoon. At the start, we each ate half of the world’s biggest sandwich, and I gave a few demos with my mouth full to other developers. Then we walked around to talk to all the organizations we could find that seemed relevant to Tablecraft as a STEM-related game. Even by the start of the Office Hours we were already exhausted, but around the end of the day Ed told us that word of Tablecraft’s popularity had spread from the terrace of the Kennedy Center all the way down to the first floor of the building, which helped us stay excited long enough to make it home and into bed alive! 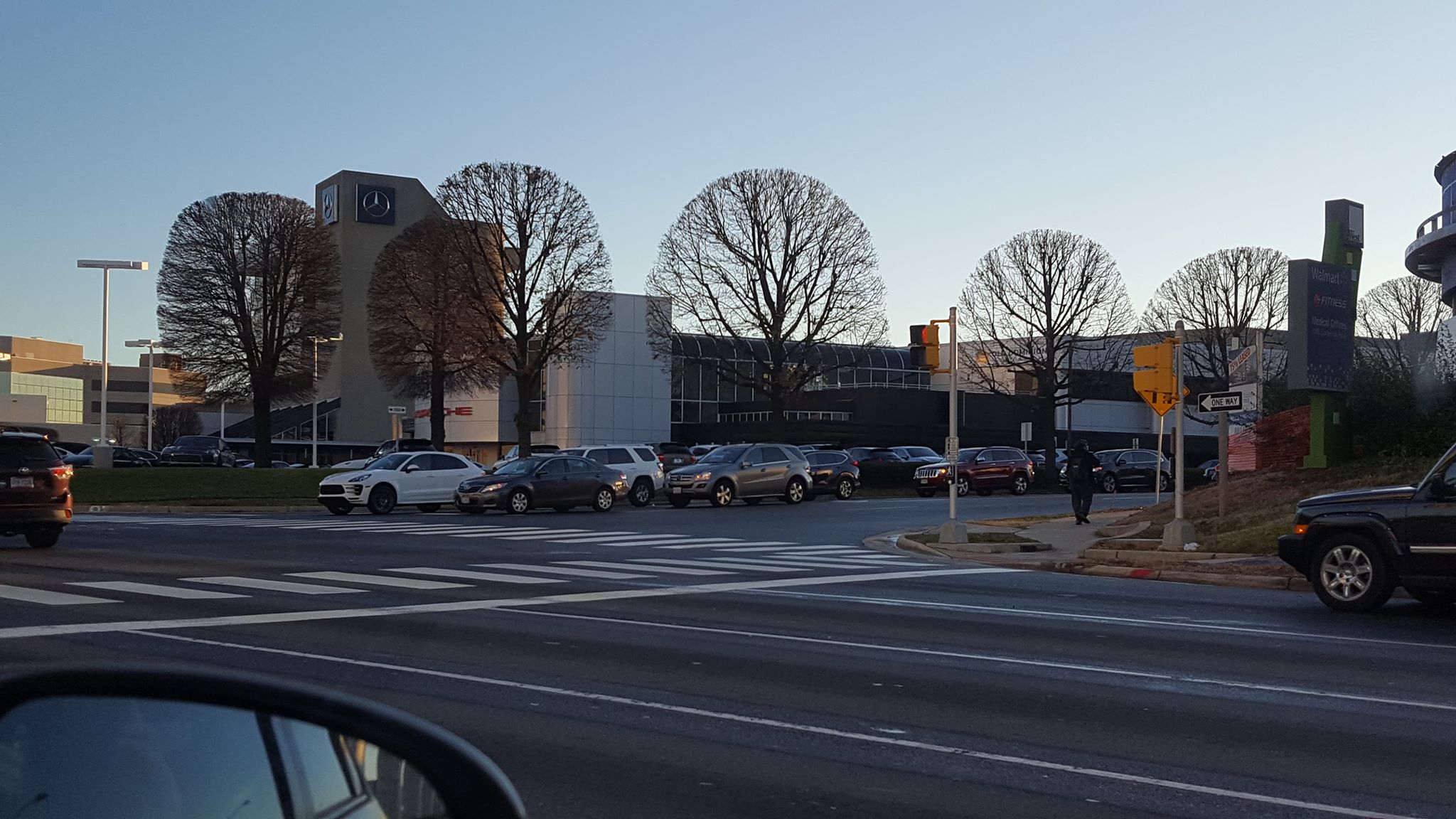 The second, and last day of the conference began with a couple panels, from developers, scientists, and stakeholders respectively. I was particularly into the learning scientists’ panel, because as a game developer trying to make an educational game, proving that it teaches useful skills is a new and difficult challenge. The panel was very easy to understand, which in my opinion is how you know scientists are really good, since not leaning on jargon requires particularly clear knowledge. They also talked about some education science resources for game developers that I didn’t know about, my favorite of which was named NERD. 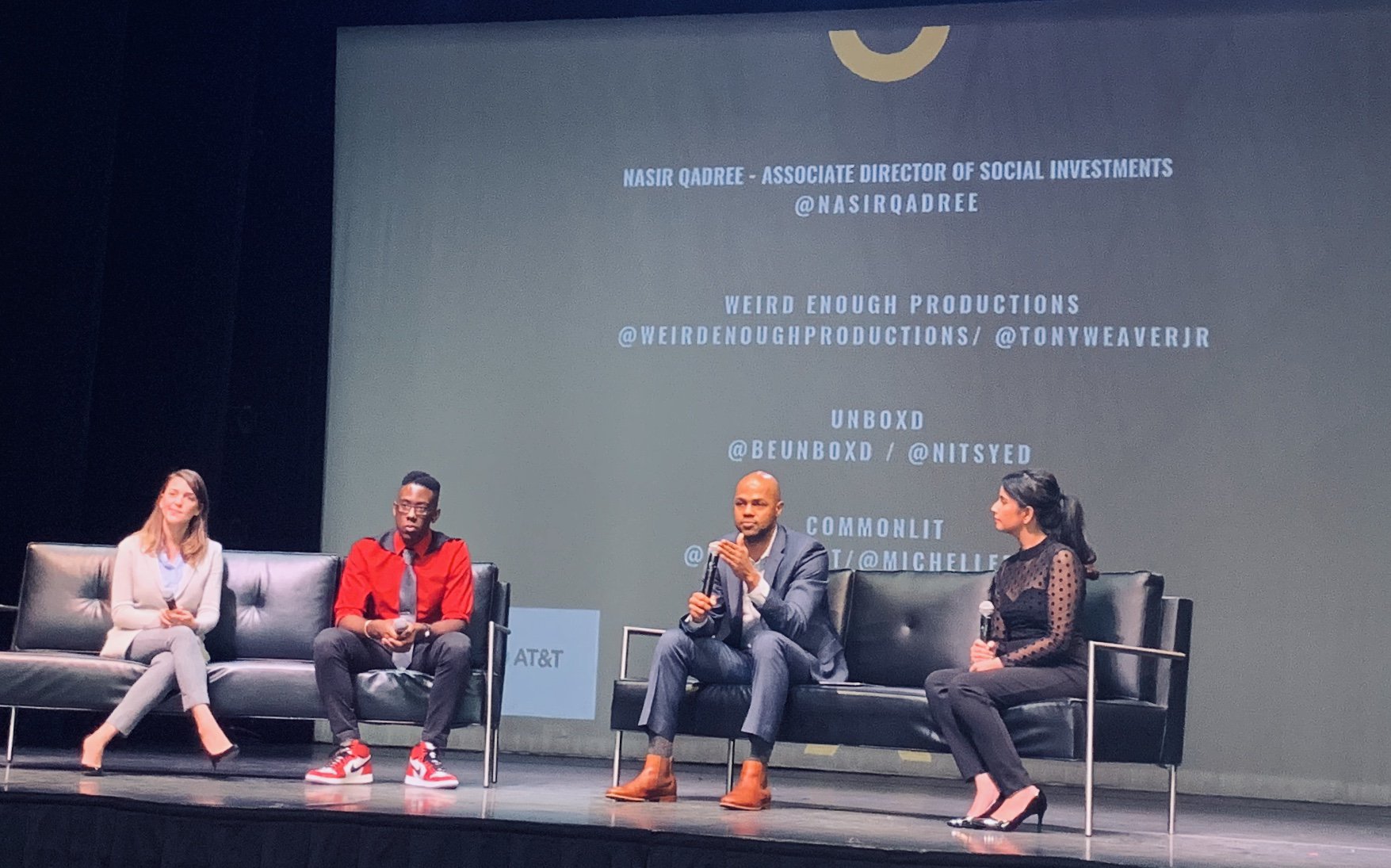 Image stolen from @Games_Learning on Twitter, please don’t sue us, we’re not SBIR-funded, we’re not funded at all (by that I mean we have no funds) and student loans are about to kick in, pls help

The last official bit of conference was the public showcase. I got to have some of my family play the game, which was great. Plus, a lot of cool people we hadn’t yet met got to see or try Tablecraft, including a representative from Oculus, a charismatic man who really wanted me to know his son was looking for a job, and a dad who had to argue with his kid who didn’t want to stop playing so the dad could get a turn playing the game. Overall, though, the public showcase, and the entire second day of the conference, was really quite relaxing compared to the kidnado. Adults don’t always understand VR controls the way kids do, and they’re less good at having fun (sorry adults!), but they stand in a queue! If the previous day was a fun company trip to splash mountain, the second day was more like company poker at the hotel pool. Higher stakes, but it was nice to be breathing in between sentences.

The last, unofficial part of the conference was dinner at an AMAZING restaurant called Farmers, Fishers, and Bakers. We got a bit lost walking over to it, but Ed Metz actually saved us a spot, which was super nice! At dinner, we enjoyed the company of some of our fellow developers as well as Ed’s, as he shared with us the story of how the expo came to be and what drives him to keep it going.

The whole conference was only two days long, but we probably got to meet more kids, parents, and educators who were excited about Tablecraft than we have at any other. Thank you for having us, we’d love to be there again next year! 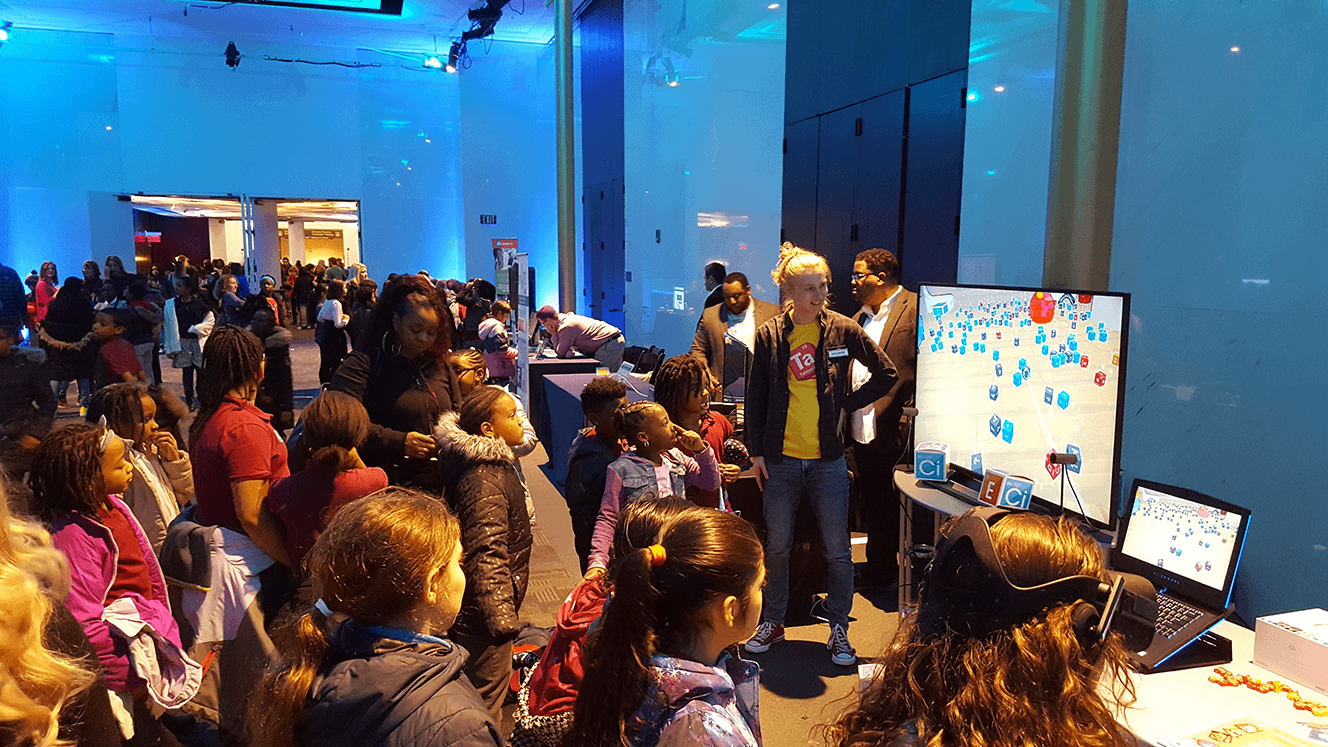