Guillaume back with a second conference post-mortem! 😉 As you might recall, our last outing was to GDC, a huge big-money games-industry conference where the best we could do was focus on finding a few like-minded folks.

By contrast, Games For Change (G4C) was entirely people who were passionate about games using new technology and covering meaningful subject matters, like we’re trying to do, so we were pretty excited about it. This time we had a booth, and we could not wait to see other people play the game! The stars were aligned for everything to go right, but then bad luck came along, launching us to a rocky start before we turned it around and pulled off a smooth and exciting landing at the end of the show.

G4C has an affiliated neuroscience game jam which takes place before it – the XR Brain Jam – and we’d signed up to participate when we bought our plane tickets. We were excited to arrive early in NYC and get to meet many of the G4C attendees at the game jam before the actual conference started later in the week. 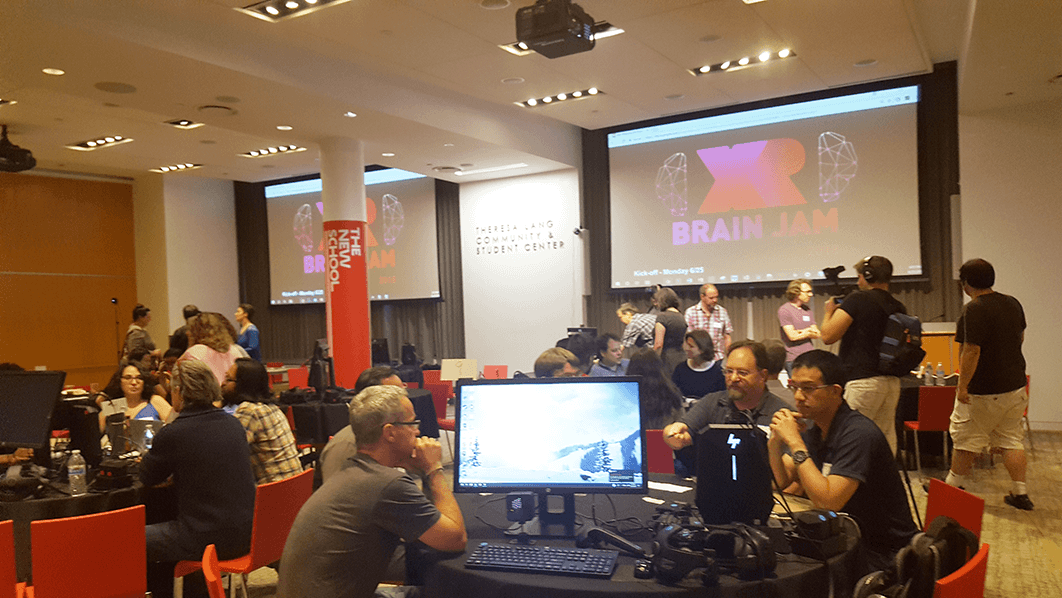 Except, as it turns out, the jam was already full. So now with a couple of extra days of free time in NYC, we signed up for the jam as volunteers and decided to infiltrate the premises that way. It wasn’t quite the same privileged position as being part of the jam itself, but it wasn’t all that bad either: we got to meet everyone still, except now instead of contributing with our expertise on game development, we’d have to contribute with our expertise on carrying things.

We didn’t really look like the high-schoolers who were working alongside us to carry boxes and set up VR kits, which probably explains why we were sent on all the alcohol-pickup missions. When we had downtime, we’d watch the proceedings at the jam, and learn about the people participating, to see who we’d want to meet at the event proper. Plus, we worked on Tablecraft, in a spot where we could help people find the bathroom, which was the G4C edition of our classic conference hack, Working by the Outlets. On Day 2 of the 3-day jam, we were the only ones to arrive on time at 8 am! After we set up breakfast for everyone, we sat at a table, working on getting Tablecraft’s AI assistant to move around when she talks to you. 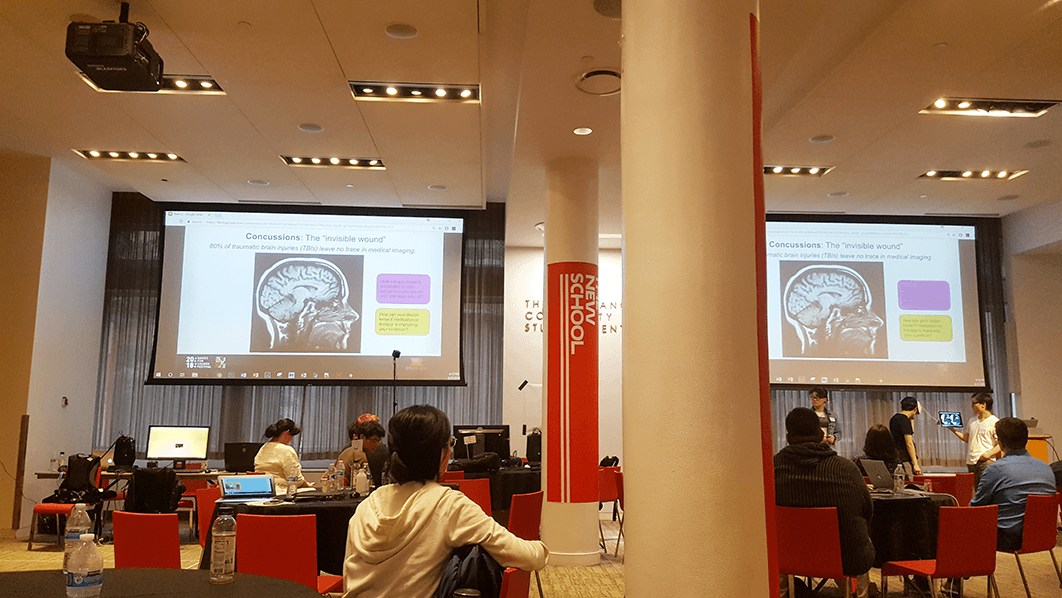 The Working by the Outlets hack paid off that very morning. One of the organizers of the jam, Sabrina Culyba – designer of Schell Games’ Hololab Champions – invited us to work in the jam space, and asked to play our demo! At this point, the conference was going great, and we were making a positive name for ourselves. Then, I suddenly fell very sick.

At around 10 am, I developed a sudden fever, and asked to sleep in the volunteer office for an hour or so. Then, I tried to get back to work – we wanted to polish up a couple last details on our demo before we showed it to Sabrina! I was still shaking, though, and the volunteer organizers soon grew concerned that I would get others sick. I tried my best to stay upright and work out of the way, so as not to make anyone uncomfortable, but in the end we were kicked right out to the NYC streets, where Rafa and I walked 45 minutes back to our AirBnB. We were feeling pretty sad, since our first opportunity seemed to be drifting away, but there was nothing to do but go home and get rest. 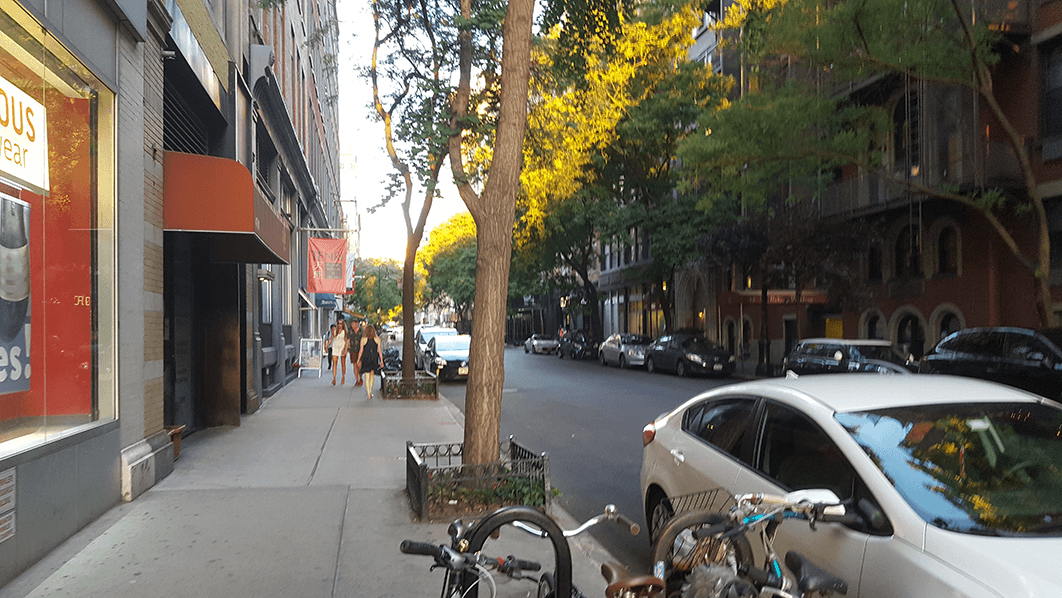 Scare #2: The Case of the Exploded Ear

On the 3rd day of the game jam, my fever was gone, which was strange. We took it as reason enough to get back to work, and put in some time with the volunteers to make up for the previous day. Then, we found Sabrina and offered her a demo. Her husband Dave, of Carnegie-Mellon, also played the game, and she gave us a huge amount of information on how she had tackled problems in her own VR chemistry game, some of which we had in common. She could have treated us as competition, but instead we had a big group conversation about making chemistry work in VR. To me that was a highlight of the conference, and indicative of the unified passion of its attendees. Over the course of the conference, Rafael and I saw Sabrina and Dave many times, and they became our preferred familiar faces to search for in a given crowd, because we had so much in common. 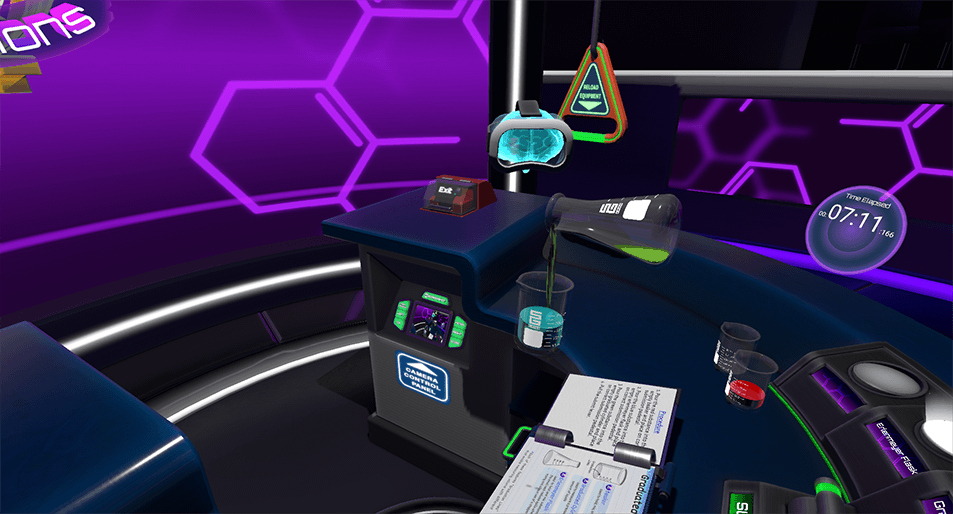 From a business side, we had come to the conference to try to fund the remainder of Tablecraft’s development. Because of Rafa’s Fulbright VISA status, we needed either a partner, who could apply with us for a government grant called the SBIR, or a publisher, who could pay us in advance of Tablecraft’s release, and then support distributing it. I think our strategy for finding this stuff worked pretty well: we let other people bring it up. Instead, we focused on just showing people the game! On the 3rd and last day of the jam, Sabrina mentioned that we should show Tablecraft to Jesse, the CEO of Schell Games, and so that became our new quest. 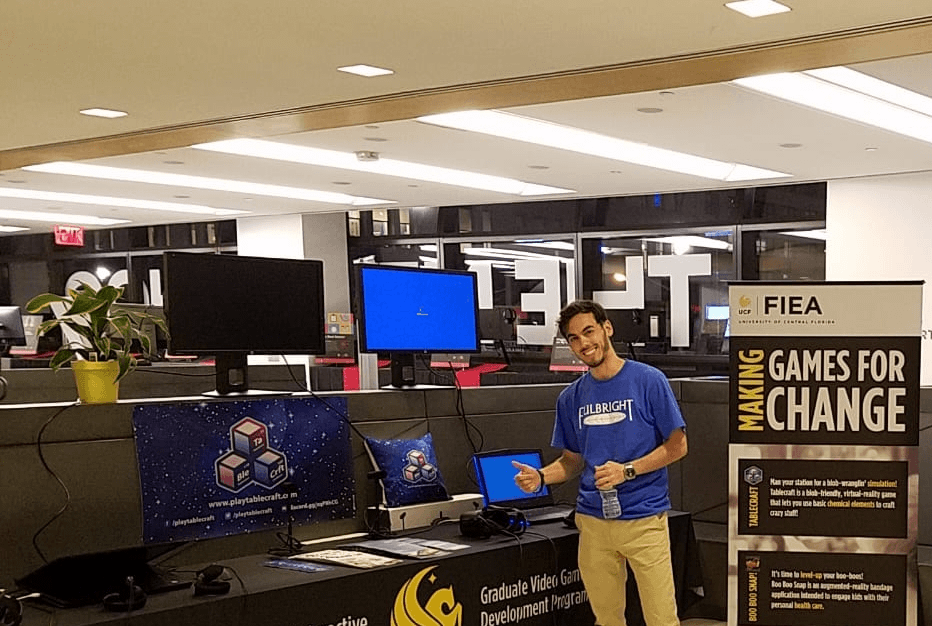 Rafa setting up Tablecraft’s booth at G4C, the night before it opened

The night of the end of the game jam, I developed a terrible headache, which then centered on my right ear. The next morning, my eardrum had ruptured. I went to an urgent care center, and it turned out my odd 1-day fever had been caused by a middle ear infection. I got antibiotics and pain medication, and was told it would heal over time. I also couldn’t hear a thing with my right ear. Enthusiastic group design sessions like the one we’d had with Dave and Sabrina were going to be a thing of the past for this conference. At best, I’d have to engage with whoever was to my direct left. But the next day, things started to look up!

On the first day of the actual conference, we were immediately the most popular kids in school. It was glorious. We’d lugged 2 Oculus Rifts to New York City, and scrambled to improve our booth with a large monitor for each. At the day’s start, with our laptops on the table and our monitors on the wall, we had 4 colorful videos of Tablecraft bouncing around on 4 displays, with a sleek black tablecloth holding the waiting headsets. The whole thing was facing the main entry to the convention hall — it reminded me of a bank of arcade attract screens.

Sharing the space with us were our good friends James Gaiser and Sound Wright, showcasing their sleek augmented-reality app Boo Boo Snap! James was kind enough to help us out with a place to stay in NYC after our AirBnB expired, and both him and Sound were a constant source of positive energy at the booth! 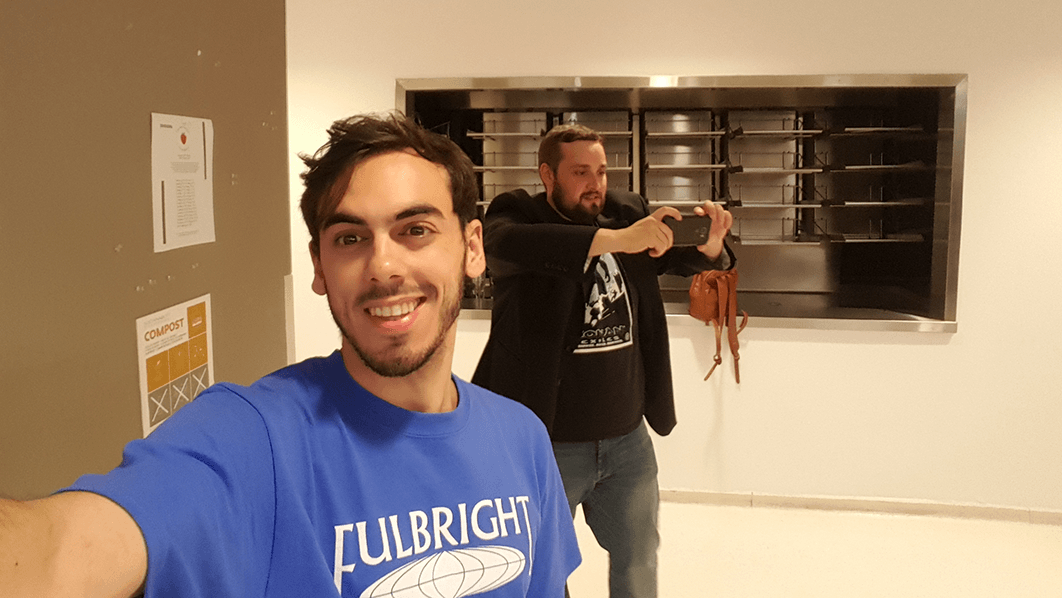 Pretty soon we had a constant flow of interested parties, with at least 1 demo active at all times in the day. I tried to give the demo on the screen to the right, since I could stand with the player to my left and hear what was going on. In general, we were pretty hands-on with the demos too, guiding players toward each machine as needed, since the game doesn’t quite explain itself entirely just yet. 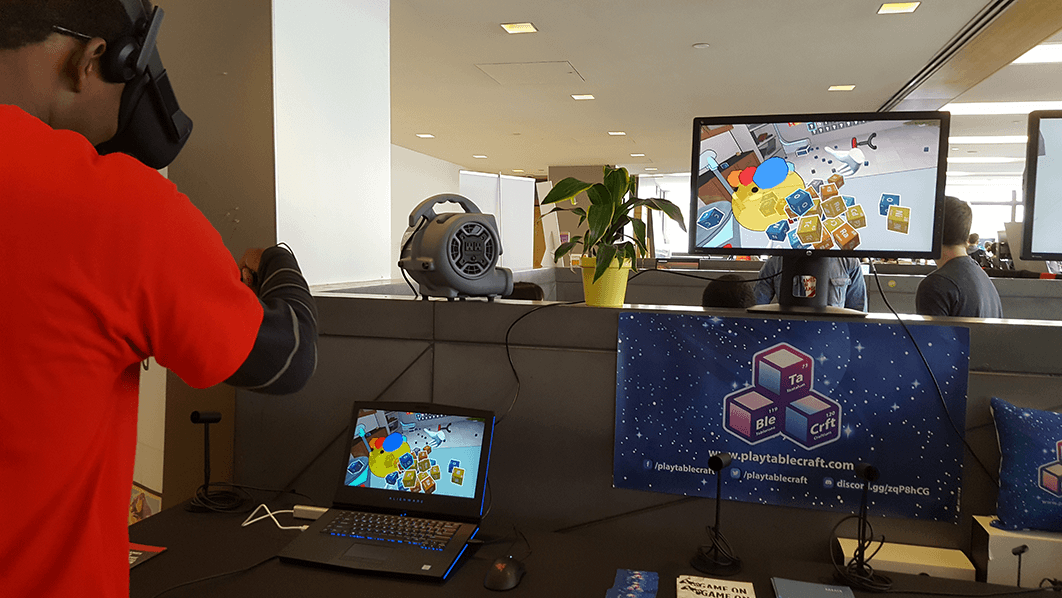 It was a long day, reintroducing the various parts of the game in rapid succession, but it was extremely rewarding, because so many people with different levels of experience and areas of interest gave it a real go. Many were game designers or educators, and gave us useful, clear feedback. And most of all, the game REALLY hooked a few people.

Bill Sabram was our Tablecraft prodigy. He started his design career on electronic toys, and like many of the other game designers who tried it, he was bursting with ideas. Bill had a secret strategy for winning our hearts, though: he just could not stop playing! 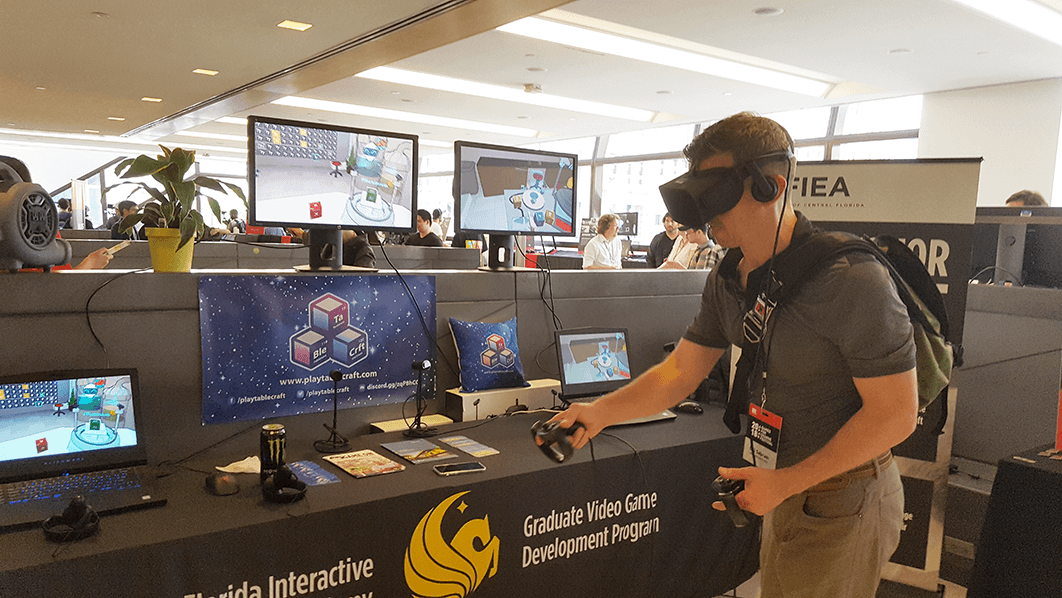 Bill Sabram, the man, the myth, the legend

At one point, a media crew bristling with cameras and microphones swung into the booth, as they made the rounds through the whole conference. Bill was completely unphased as they interviewed the projects next to ours, and at one point he got the whole camera crew laughing by sticking his nose unknowingly in the reporter’s back. Bill had been playing for more than an hour, and he’d forgotten what we looked like when the reporter put a microphone to his mouth and asked him about the game. Then and there he gave a better pitch than we’d ever delivered ourselves, focused on how he was so engaged with what set each element apart.

Without ever taking off his headset, Bill was an outsize presence in our booth for the hour and a half in which he unlocked over 75% of the entire periodic table. You can get a taste of it by watching his impromptu interview here:

On the last day of G4C things started to really pop off. The momentum we’d built talking to individuals meant the project was relatively known, and a few of the conference heavyweights were out and about. Jesse Schell and Harley Baldwin of Schell games came over to the booth to play Tablecraft, with Jesse inquiring us about our business strategy and Harley offering valuable input on the game’s design. But on that day, in New York City, the friendliest, majorest leaguer of all was Edward Metz, Director of the Institute of Education Sciences’ SBIR grant program.

We first got to meet Ed at an event called Meet the Funders, where he gave a short talk about all the requirements of the SBIR grant, and answered questions. Ours was a popular one — how does Rafael’s visa status affect our chance at the grant? It turned out at least 4 people in the event were foreign citizens interested in the grant as well! The thing that stood out to me at the talk was how Ed thought everyone in the field was making something worth making, and all they needed help with was making it real. To me, it headed off any hint of competitiveness or rancor in the room. Apparently the guy helps over 300 different people per year with navigating the bureaucratic maze, and it’s clearly because he genuinely wants more education technology to exist. 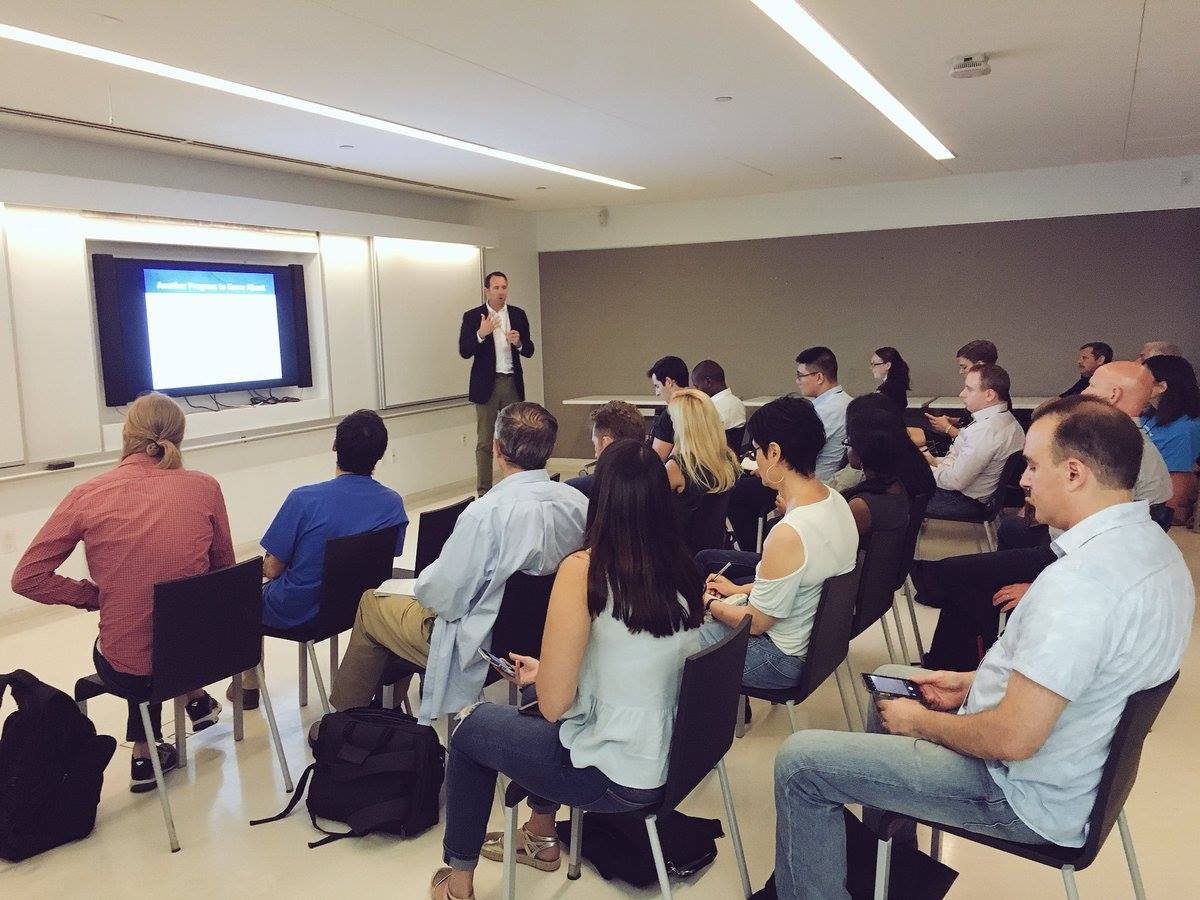 Speaking of genuine enthusiasm, here’s the haymaker moment for Tablecraft at Games For Change: Ed Metz, director of the IES’ grant program, played Tablecraft, and loved it! Rafa directed the demo in a very player-oriented way, focusing on what fun things there were to do rather than what kids would be expected to learn, and Ed seemed to really get the direction of the game. He invited us to the IES’ Principal Investigators conference in January, so we could show off Tablecraft. He said, “I’m trying to keep the number of external presenters low this year, but for powerful experiences…”

And that was how the conference came to an end. We’re gonna try to find a way to apply for that grant in spite of Rafa’s Fulbright constraints, so look forward to updates on the reams of paperwork and other fun blob foods we’ll be producing every day! If we make it, Tablecraft will have the resources for an order of magnitude more features, so cheer us on on Discord, or call your congresswoman or something. I don’t really know how grants work yet but my grant-o-meter is off the charts. 🚀