Hi, Rafael here. Scroll down to the bottom of this blog post if you’d like to learn how you can apply to the International Silly Awards, or continue reading to learn more about them.

So Tablecraft kicked off 2019 by getting picked as a finalist in the Ed Tech Awards. Then, a couple months later, Tablecraft was awarded a Silver Award at the Serious Play Awards.

For a while now, I’ve been thinking about whether we should broadcast these news or not. When I first learned of these awards, I thought it’d be pretty neat to compete in them – perhaps we could win and that would generate some momentum, I thought. In practice, I was just mimicking what I had seen other game companies do. Schell Games, for example, who I think of as a leader in the fields of VR and Ed Tech, is constantly getting awards. This is what their homepage looks like right now:

Of the 5 most recent articles displayed on their homepage, 3 of them are recognition:

That seems pretty amazing. I wanna be able to broadcast awesome news like that about Tablecraft too. So we must apply to these awards, I thought. With that goal in mind, we gladly paid the submission fees: $250 per category for the Ed Tech Awards, so $750 total (plus tax) for the 3 categories we applied to, and $200 for the Serious Play Awards. A bit expensive, I thought, but surely it has to be worth it. Plus, someone has to pay the judges to have them go through all the applications and pick the best ones, right?

Well, the 2019 Finalists and Winners have now been announced. There were 635 Finalists in the Ed Tech Awards. On average, it was about 10 Finalists per category (including the one where we were a Finalist). My immediate reaction was wooah, those are a lot of Finalists. If all of those 635 Finalists paid $250 per submission, that’s $158,750. And those are just the Finalists. There were probably more submissions, right? That’s a lot of dollar signs. But hey, the trophies they’ll send to the Finalists and Winners have to be paid for somehow, right? Or… wait, hold on a second: if we want a trophy we have to pay an extra $200 plus shipping?

Ok well, that’s slightly suspicious. Why are there so many Finalists? Is it because more finalists results in more people talking about the fact they were a Finalist and therefore more marketing being generated for the Ed Tech Awards? Or is it because they perhaps get a cut of the extra $200 every Finalist has to pay for a trophy? Whatever the case, we can’t judge the whole award ecosystem based on a single example. So let’s have a look at the Serious Play Awards.

Serious Play did not pick Finalists, they only picked Winners. In the 2019 International Serious Play Awards, there were 23 Gold Winners, 24 Silver Winners and 13 Bronze Winners. Uhm, that’s odd – there are more Gold winners than Bronze winners. And why are there so many winners in the first place? It’s almost as if the evaluation process was all loosey goosey, with the judges opening up the applicants’ websites and then going like “alright, you kinda look like a Silver Winner to me”.

Meanwhile, Serious Play gets $200 per application (trophies not included), and we developers get to brag about winning an award. Then next year we can all apply again, Serious Play makes serious cash and we all get awards again. Everybody wins!

So with all of that in mind, it is my pleasure to announce the International Silly Awards!

The goal of the International Silly Awards is to give struggling indie developers a chance to stand out and generate momentum for their games! Starting today, you can apply to participate in the competition. Here are the rules:

Apply to the International Silly Awards:

Good luck to all the applicants! To get the ball rolling, I’d like to announce the first winner of the 2019 International Silly Awards: Tablecraft! Wohoo, congratulations to the team! Here’s the trophy we received in the mail today: 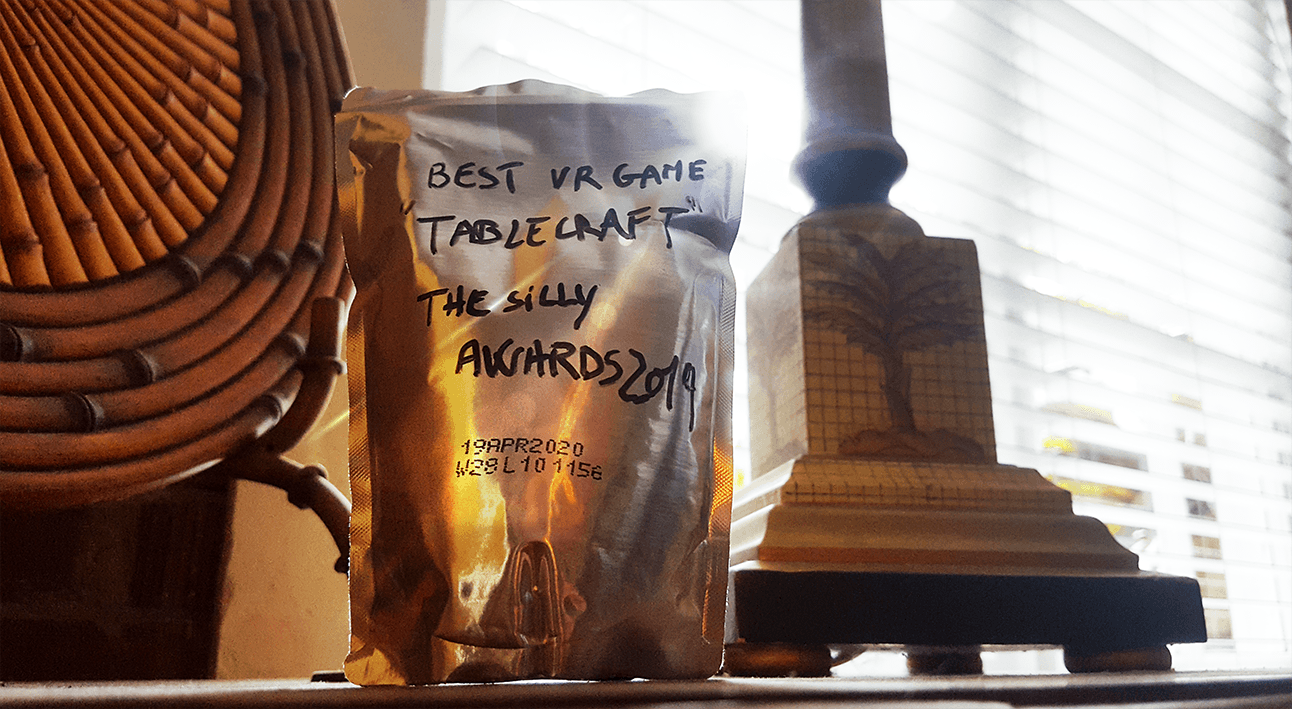 Hey you! Quick, look under your seat, we got you a brand new podcast episode! 🎁

This time we cover lots of stuff, partly because it’s been ages since the last episode. Oops. Here are the relevant timestamps:

Until next time, happy holidays!